New River Trail {A Photo Recap of Bikepacking in Virginia}

By Misty Personal Oct 04, 2020 No Comments on New River Trail {A Photo Recap of Bikepacking in Virginia} I had been looking forward to attempting this bikepacking trip for forever. Wanting to see how far I could go, wanting to see what my sustainability was. When it comes to bikepacking in Virginia, there aren’t a TON of options for a multi-day trip that I know of – but New River Trail was one that my husband and Mike Dragon did last year that I wanted to try. We’ve done smaller trips that are technically bikepacking to False Cape, but this was more rigorous. 4 miles the first day (that’s nothing), 26 miles the 2nd day, and 22 miles the 3rd day.

I was super excited for a plethora of reasons: the main one being that Chris and I had never done a camping trip just us! For all the camping that we’d done the last year and a half, we’d either gone with friends or our kids. This was such a great getaway. Truly, it was not only great, but much-needed. And a safe getaway, too, because we were outside the entire time!

The first day was easy. Our shuttle took us to the start in Galax, and we rode to the first campground. We were right on the river, and it was awesome. There were very few people (maybe 4 other campsites total). We haven’t tent camped in a while, so that took some getting used to (we usually camp in hammocks, but were trying to pack less). 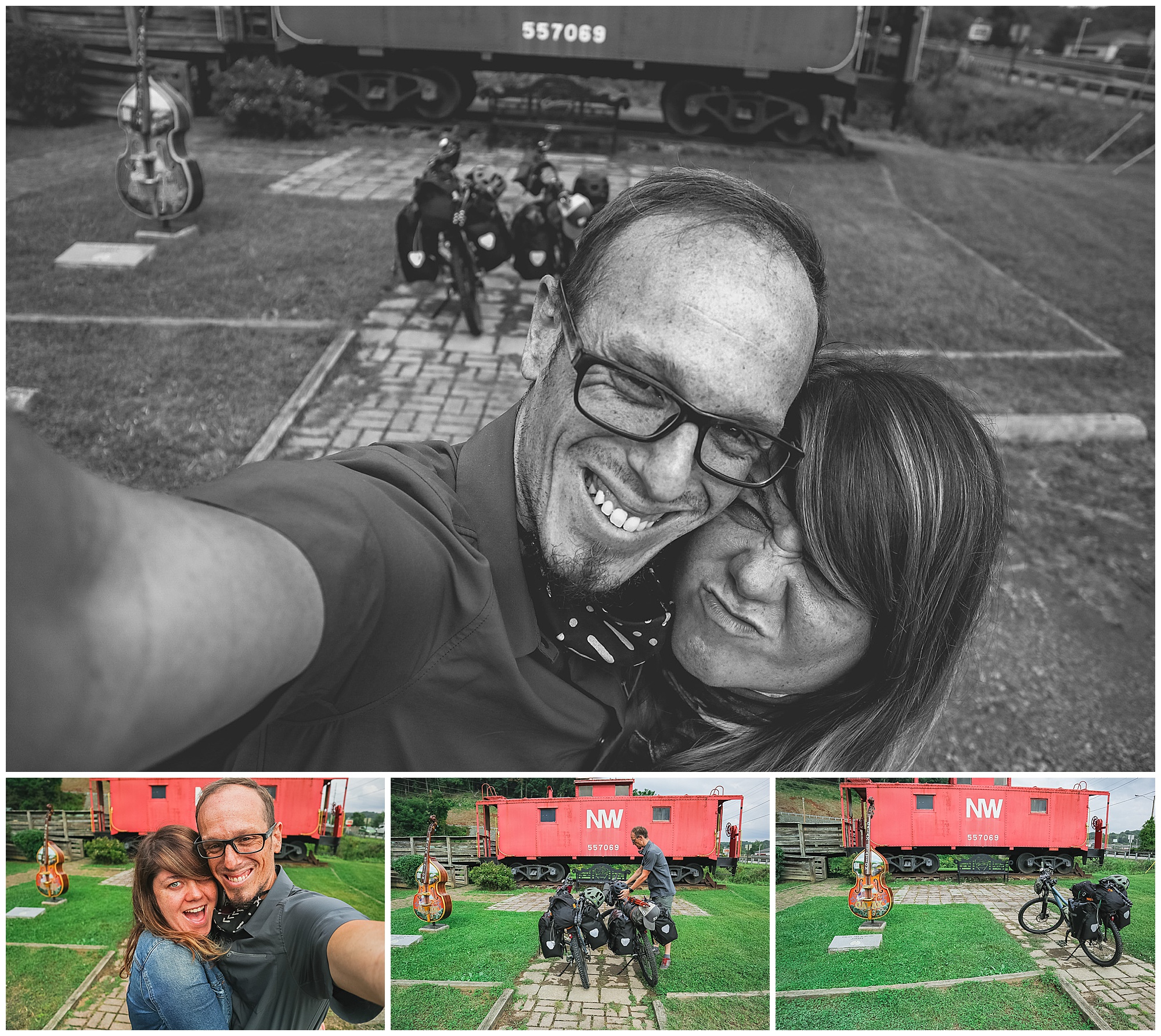 We even got to see my Aunt Laurey and Uncle John and their pup for a visit. They brought some local beers and delicious cookies that we drank for the rest of the trip – it was awesome. We hadn’t seen them in person in a few years, so it was really nice to catch up.

The next morning we packed up to head to Foster Falls. You can see that we had our priorities straight – hand sanitizer, packing drinks, biscuits and gravy meals from Mountain House (the only way to eat breakfast when you’re camping), and instant coffee from Trader Joes. This was the day I was looking forward to the most. I have this whole thing with bridges. I’m terrified of them. So it was cool to start the day with an easy one and work my way up to the scarier ones. And that’s scary by my account, not my husband’s, who would probably tell you that they’re just really awesome. He’d be right. 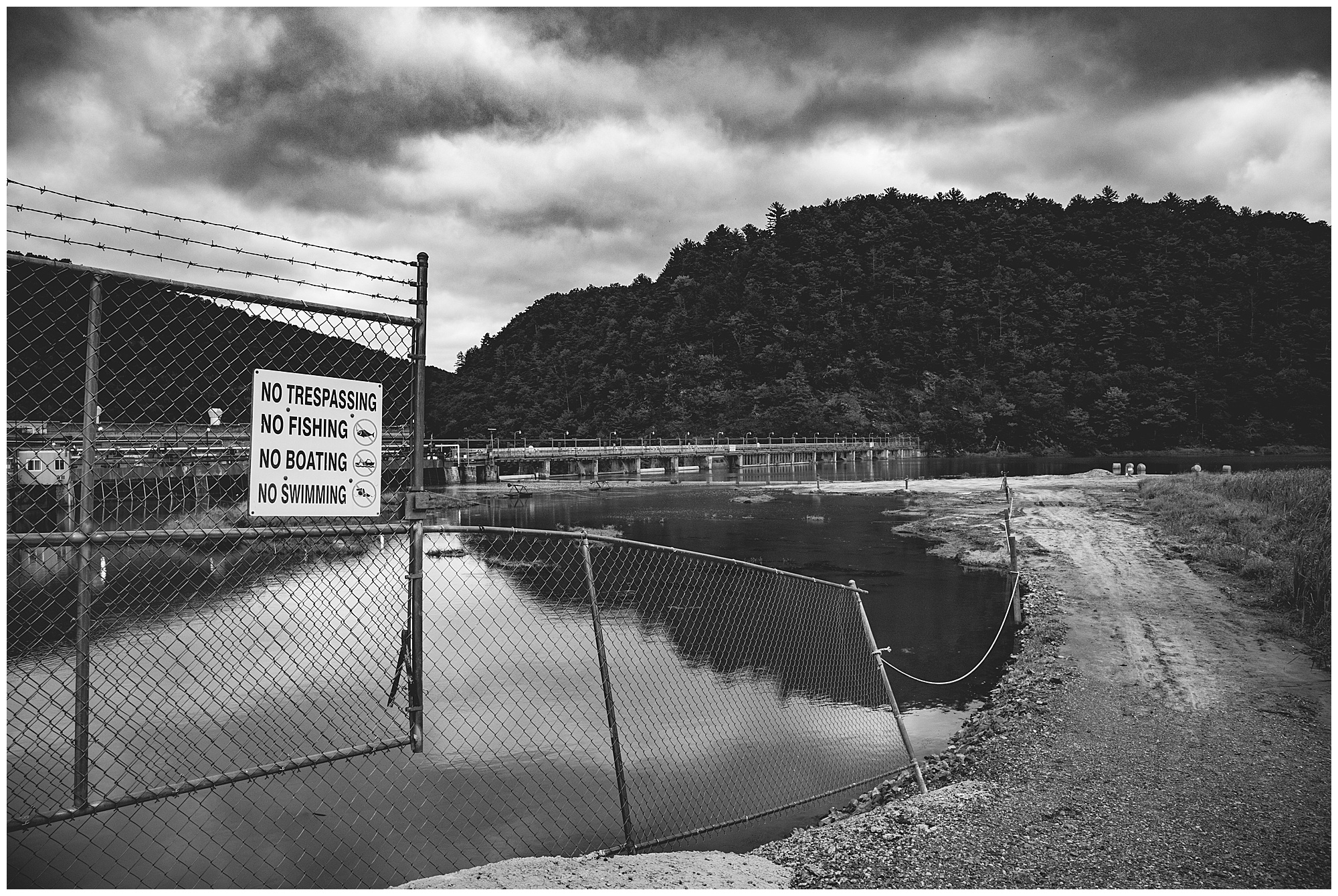 Apparently I know one yoga pose to do on trips. See below. And above. Foster Falls was GORGEOUS. Honestly, I’d take a trip just to camp there. While the campsites were kind of in the wide open, all the things to do and see around there were gorgeous. The Shot Tower is nearby, the river was RIGHT by our campsite, and there were stars for miles once the sun went down. The fog the next morning was unreal, but incredibly beautiful. It was the first cold day that we’d felt of the year, and it was… well, cold. We had coffee and a fire, packed everything up, and set out for the third day, to get back to our car. There were lots of awesome things to see along the way, but not as picturesque as day 2. This was the last spot I took photos on the trip. After this, there was a little bit of an elevation increase compared to a mostly flat trail. You can’t expect to be bikepacking in Virginia and not encounter some kind of elevation – especially this close to the mountains.  Not going to lie. We walked the bike a few times so I could take a break. As much as I love to bike, I hadn’t adequately prepared for this. I had taken a small biking hiatus, and as a result, didn’t have all the strength I wanted! If you’re thinking about bikepacking in Virginia – I feel like the New River Trail is a GREAT place to start. Awesome views, gorgeous bridges, riding through towns and seeing all the history along the trail. Plus, this was the first time that I had gone camping with my husband by ourselves – I think we did pretty well. I’d love to try to go in the fall when the leaves are changing. I feel like if we had gone a month and a half later, it would’ve been even more magical (and probably a little chillier!).